The Jerusalem Post saw firsthand the efforts of president of the Israel-Georgia Chamber of Commerce, Itsik Moshe, to promote bilateral relations. With last week’s UN General Assembly resolution condemning Trump’s decision to transfer the US embassy to Jerusalem, the small Caucasian country of Georgia did not vote. It’s a shift since 2012 when Georgia voted to recognize Palestine as a UN observer state. The turnaround may be due to burgeoning diplomatic ties between Israel and

Magazine parliament which is dedicated to news about national politics and international partners of Georgia mentioned Hilik Bar...

The representatives of the European University attended the forum organized by

"Hasbara and future connections" - this is the name of the forum, which was held in 15th of December by the "Israeli House"...

An event dedicated to opening of a Jewish library was held, Hanukka candle was lit up and the forum was held... 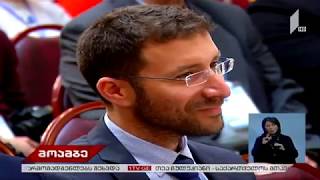 News from the AEPJ General Assembly 2022

Tomorrow on 14th of March, a presentation of a book "Zionism Against All Odds" will be held

Memorial of Georgian Schindlers will be opened tomorrow

Memorial of Georgian Schindlers will be opened tomorrow